skip to main | skip to sidebar

I have people frequently asking how to use the shanks and soup bones that they get on their animal.  Lots of people opt out of the bones because they just don’t know what to do with them and that makes me want to cry – because they are an animal part I would not know what to do without.   I make a batch of bison broth every week to week and a half.  It is a total no brainer to make and is extremely nutritious – not to mention yummy. Here’s what I do:

Open 1 frozen pack of shanks or soup bones and put them in the bottom of a 6qt (or whatever you have) crockpot.  Cover with water all the way to the top.  Add salt (about a teaspoon per Qt.), pepper, Montreal Steak Seasoning (without any garbage in it), garlic powder, and onion powder.  Let it rip on low for 24 hours.  Strain the broth through a colander.  I used to use paper towels or fine mesh cheesecloth to do this so that my broth was clear, and it was a big, fat pain in the rear.  Then a friend told me that she just uses her immersion blender to blend up all the little particles that come through. They aren’t meat, but just parts of the broth that keep it from being clear.  It is so much easier this way. And then, you are able to add the marrow to the broth and blend it up in there too.  I store it in 1 qt freezer containers.  One goes directly in the fridge and the others I freeze for later in the week.   I use this for everything…..I braise vegetables in it (brussell sprouts are delish after being sauted in coconut oil and then braised til tender with a little bison or beef broth), add it to anything that calls for liquid, and even drink it for lunch.  It is perfect yumminess.

After straining, you will have a good amount of meat left with the bones.  I pick this apart, and make enchiladas with it……meat, enchilada sauce, cheese (for dairy dooers – sigh!) rolled in a tortilla – corn or flour.   Please try this before you decide to opt out of your shanks and soup bones.  I am sure that you will be so glad that you did.  In fact, you will end up running out long before you buy your next portion of a beef or bison and be sorry that you don’t have more.
Posted by Karen Dunham at 8:13 AM No comments: Links to this post

On the first day of Heritage classes this year, I was sitting outside Mrs. Miller’s Prima Latina class and about laughed myself silly overhearing some of what was going on in there.  I was not laughing at her teaching, but at her amazing ability to exercise self-control in the face of hilarity - she has a whole class of 5-6 year olds.   Better her than me.

I had written these down when we got home from classes, but had forgotten about it.  Here are some highlights:

The kids were asked to give their name and something about themselves that they wanted to class to know:
“This isn’t my actual hair.  My hair is really straight and sticks out like this”    So, he had a wig on, eh?  I couldn’t see around the curtain but I was dying to.

“My favorite color is black, white, red and yellow”

Other notables:
There are a set of twins in the class, so regarding twins some comments ensued, “they are born at the same time; one comes out and then the other and they just ‘bloop’ right out together” (um, nope.  No blooping at all.  obviously SOMEONE has never been in labor!)

Mrs. Miller – “who knows anything about Latin?  What people speak Latin now?”  student: “you!” (observant! She IS the teacher!)

Have any of you studied ancient Rome?  “I’ve studied American Indians!”

“I changed my name and I want you to call me my new name.  Eric-kai.  Hm. I wonder if his mother knows?? His name isn’t even Eric.
Posted by Karen Dunham at 10:29 PM No comments: Links to this post

So, I know that kids are tweaked…all of them. It’s just their nature.  I have one especially super tweaker kid, but they are all their share of tweaked.

My super tweaker (not mentioning any names and I bet none of you can guess, right?  Right!!)  is a really loud, crazy, odd, darling, funny, talented, child who makes weird noises constantly (I think I need to write Julian Smith’s mom and ask if she was worried when he was young…..the answer probably won’t make me feel any better, but might help me prepare emotionally for the future).  He was being unusually loud(er) and I was holding my head saying stop, stop, stop you’re driving me crazy.  And he said “I can’t mom, I have the energy of a cow”.  Hm.  Oh…..yeah……I get it….no, I don’t.…  Here ‘s his explanation:  “Cows are moving, moving, moving their mouths all day long…chew, chew, chew.  They never stop moving their mouths…..they have lots of energy…..just like me”.  Okay.  Yep, I get the mouth thing. – boy do I.  And be assured that this wisdom was offered about 40 decibels above normal in a squeaky, cartoon character voice.  Tweaker.   Did I mention that he plays the drums?  Figures, huh?

Last night, we were talking about everyone getting older and Josiah being out of the house in the next few years most likely (and I am getting sad), and the tweaker blurts out, without even a second to contemplate – natural as anything….”Yeah, and I’ll move out with him.  I still won’t have to pay rent and he will have good recording equipment then and a way better drum kit than I have now”……huh.  And so we were thrown off in a mere instant for better gear.  I see how this works.  The rest of us laughed really hard, but he was serious.

Posted by Karen Dunham at 7:00 AM No comments: Links to this post

If you haven’t signed up for PaperBack Swap (PBS), you ought to check it out.  We LOVE it.  You “buy” books from other members with points that you earn by posting your own books.  By posting your first 10 books, you earn a point, and then you earn a point for each additional book that someone requests from your posted list (after you send it).  Each regular book “costs” one point.  No money passes hands, but you do have to pay to ship a book that a member requests from you.  When you request a book from another member, they pay the shipping.

One of my favorite features is that you can create a wish list.  When the books on your list are posted by another member, you are notified via email so that you can accept the book.  We have gotten some of our favorites that way.

All books are not paperbacks, either.  We got the audiobook for 100 Cupboards a couple of years ago - that was quite a score.  And I regularly receive hardback books.  Just thought you'd want to know.

Some of my most recent amazing finds from our wish list are: 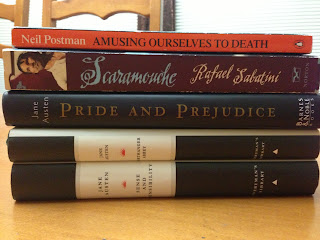 Scaramouche by Rafael Sabatini
Three Hardback Jane Austen books – Northanger Abbey, Persuasion, Pride and
Prejudice….none of them look like they have ever been read – woot, woot!!
Amusing Ourselves to Death by Neil Postman

If you tell them that kriggsy sent you (or Karen Dunham) I will get a credit for spreading the news after you post your first 10 books.  Or, you can click the link in my sidebar and that will do the trick too.

Posted by Karen Dunham at 3:57 PM No comments: Links to this post

I posted a couple of weeks ago about the Music Appreciation going on here at our home academy.  I can agree with Roling Stone’s assessment of Sgt. Pepper’s being the number one album……EVER.  But, I don’t quite see their number 2 pick.  The Beach Boys Pet Sounds earns the prestigious title.

Rolling Stone says the following in their review:

With its vivid orchestration, lyrical ambition, elegant pacing and thematic coherence, Pet Sounds invented – and in some sense perfected – the idea that an album could be more than the sum of its parts. When Wilson sang, "Wouldn't it be nice if we were older?" on the magnificent opener, he wasn't just imagining a love that could evolve past high school; he was suggesting a new grown-up identity for rock & roll music itself.

Vivid orchestration??  Thematic coherence?  Wow….some serious praise.  We listened and quite honestly, I don’t get it.  Yes, it did break them out of the very narrow category of surf music that they were in, but second best album of ALL TIME???  I do really like the iconic “Wouldn’t It Be Nice” and who hasn’t heard “Sloop John B” about a zillion times?  No one here was too impressed – they all lost interest quickly.  However, I am hearing Sgt. Pepper’s pop up on people’s playlists.
Posted by Karen Dunham at 5:27 PM No comments: Links to this post 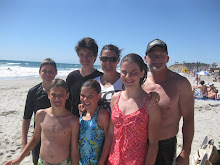